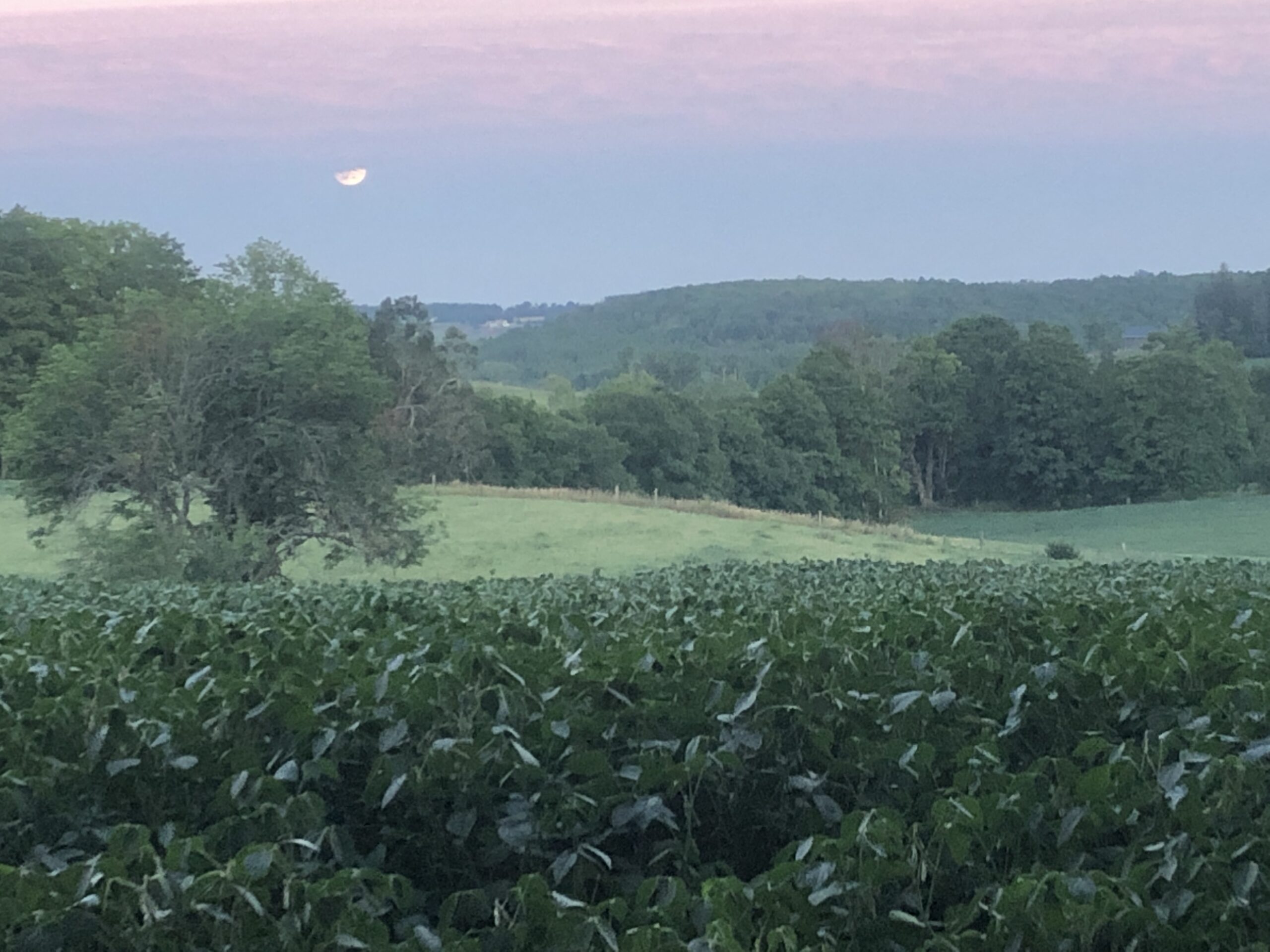 Next day, on the way to Cavan Monaghan, was a delight. This farming township, says Wikipedia, was known as Cavan-Millbrook-North Monaghan until 2007. It’s in Peterborough County in central-eastern Ontario, 20 kilometres (12 mi) southwest of the city of Peterborough.
About 10km west of Norwood I came upon a trestle bridge. Underneath flowed Indian River. Beside it was about a half acre of land, with a beach. An extended family was picnicing and swimming there. I pulled in, and asked if the land was public. It wasn’t, and wasn’t theirs. Soon the farmer who owned the land pulled up and gave us permission to stay. I had a great swim. That family sweetly offered me a sandwich and cold water. I wanted to go home with them. 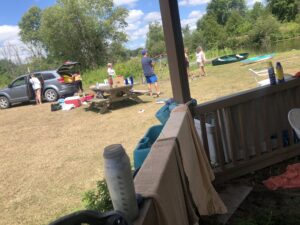 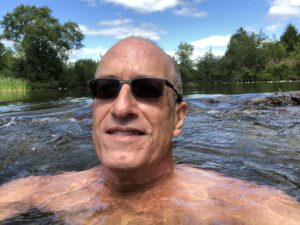 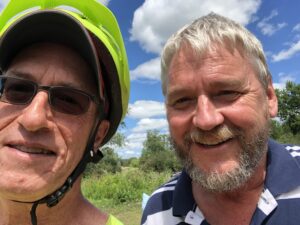 On the way to my destination I met two women who were about to mountain bike the trails. You go, ladies! 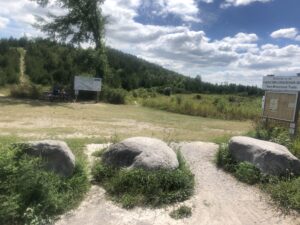 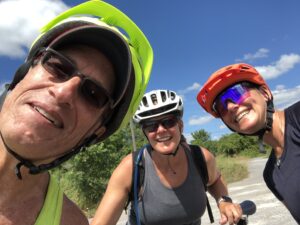 That night I stayed in another farm bunkhouse, this one very small and basic, but atop gorgeous acres of farmland. It was situated up a series of hills, with the well-worn path running directly through the crops. 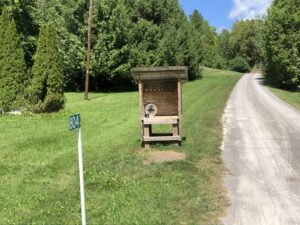 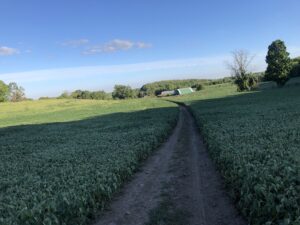 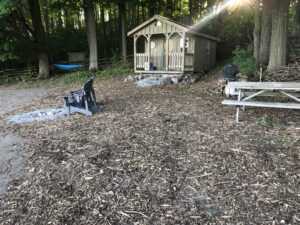 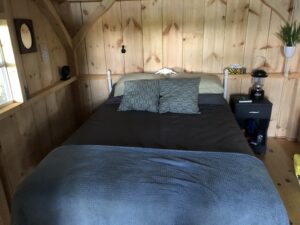 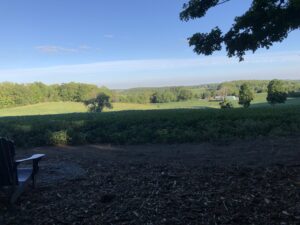 Google Maps sent me right past the property and up a big hill intially. Once I’d crested the ascent, I noticed I’d gone too far, except Google urged me onward. Instead I rode into a driveway where an older couple was doing some repairs. The wife, so nice, energetically jumped into her car, drove down the hill, and confirmed I’d gone too far. Then she asked for my Democracycle.ca website and made a big donation. How about that for country hospitality! 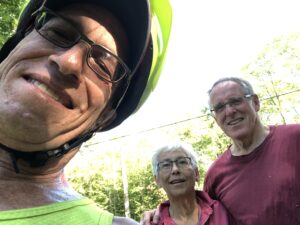 Mixed emotions as my adventure wound down.
The ride from the farm bunke outside of Cavan to central Oshawa was about 62 km. Much of it was through rolling countryside. Most of the roads were paved and quieter. I won’t miss the dirt roads strewn with stones. On the way I passed a bunch of small towns like Tapley, Dranoen, Millbrook, Manvers, Glamorgan, Tyrone and the Enniskillen Conservation Area. Bethany and Pontypool too. 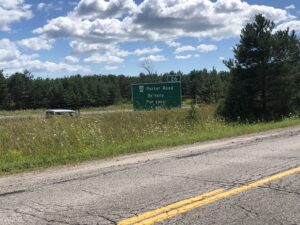 There was one enormous downhill in Ida, not far from Cavan, that had me holding on to my helmet. It went on for a full kilometer and I hit a top speed of 58.3 km/hr. Only thing marring the excitement was that my eyes started tearing from the wind. Although it made it kind of hard to see – adding to the sense of defyng gravity and reminding me of my motorcycling days – I clung to the handlebars to go straight as possible and feel the exhilaration. Immediately afterward my daughter called from Montreal. My heart was racing and she giggled as I related my tale of derring-do.
Seeing the sign for Durham made me accutely aware of how close to home I was getting. 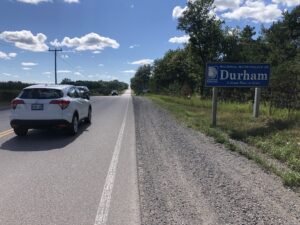 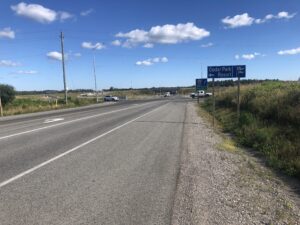 By the time I hit Oshawa I was amazed by how much it had grown. Shopping plazas and big box stores everywhere. Tons of traffic on the main streets.
My Airbnb that night was a big two bedroom basement apartment complete with living room and kitchen, plus use of the deck outside. Total cost? $77. That is 25% less than I paid on average for a single room in an Airbnb in Ontario, Quebec, New Brunswick or Nova Scotia. What with all the add-on fees Airbnb can have, there were few bargains to be found in peak summer travel season. 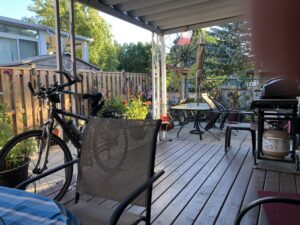 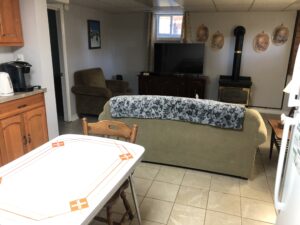